In addition to the ECS module, 1982 also saw the introduction of a redesigned model, called the Intellivision II (featuring detachable controllers and sleeker case), the System Changer (which played Atari 2600 games on the Intellivision II), and a music keyboard add-on for the ECS.

Instead of an internal power supply like the original system had, the Intellivision II would use an external AC adapter. Its main drawback, however, was that it was a non-standard power supply — running on 16.2V — meant that if the AC adapter was lost or damaged, the system could be rendered useless, as replacement power supplies for that particular voltage requirement were not readily available.

Mattel also changed the Intellivision II's internal ROM program (called the EXEC) in an attempt to lock out unlicensed 3rd party titles. To make room for the lock-out code while retaining compatibility with existing titles, some portions of the EXEC code were moved in a way that changed their timing. While most games were unaffected, a couple of the more popular titles had certain sound effects that the Intellivision II reproduced differently than intended, although the games remained playable. Mattel's attempt to lock out competitors' software titles was only temporarily successful, as the 3rd-party game manufacturers quickly figured out how to get around it.

The CPU is the General Instruments CP1610. This is a general purpose 16-bit microprocessor which has 1024 separate op-codes, and can equally well use 8-bit, 10-bit, 14-bit, and 16-bit RAM or ROM. The CP1610 in the Intellivision uses a machine cycle rate of 894.886 KHz. Individual operations on the 1610 take between 4 and 12 microcycles (Note: the CP1600 is the prototypical or conventional form of the microprocessor; the CP1610 used in the Intellivision is precisely the same in all respects except for a differing clock rate.)

The Standard Television Interface Chip (STIC), the General Instruments AY-3-8900-1, controls the video display of the Intellivision. Roughly speaking, the CPU tells the STIC how to create a desired visual display, and the STIC does all the dirty work without further work by the CPU.

The STIC will display a background field of 240 "cards" (20 wide and 12 high; each card is 8 by 8 pixels), giving a resolution of 160 pixels wide and 96 pixels high (each pixel is 2 TV lines high and is in the proportion of 5 wide by 4 high). NOTE: The STIC does NOT display the far right column of pixels, giving an actual displayed resolution of 159 by 96 pixels. Each pixel can be in any of 16 colors (eight "primaries" and eight "pastels.").

In addition, the STIC controls 8 "moving objects", each of which can be 8 wide by 8 high or, at double resolution, 8 wide by 16 half-pixels high (each moving object can also be double-sized in width and/or height). The beauty of this system is that once the CPU has defined a background and a moving object shape, it can change the location of an object merely by writing a different address to the STIC. NOTE: The moving objects can be located on a grid space wider and taller than the displayed background, allowing them to smoothly slide on or off the screen at the edges.

The CPU and the STIC are linked together and served by the System RAM, the GI RA-3-9600. The System RAM is not just a simple dumb memory chip. It contains (1) 240 locations of information about the 240 background cards (BACKTAB), (2) 112 locations of simple 16-bit ram, used as the CPU stack and (3) a bus arbitration controller to control access to the Graphics ROM (GROM) and the Graphics RAM (GRAM), both of which are accessed by the CPU and the STIC (but never at the same time). The System RAM is crucial from the hardware point of view, but the timing features are transparent to the programmer.

The sound chip is a GI AY-3-8914. This chip contains three separate channels of sound, each channel of which can be individually controlled for frequency and volume. There is also a noise generator on the chip, which can be added to any of the three channels. All three channels are mixed, and fed to the sound output of the TV.

Graphics ROM and the Graphics RAM (GROM and GRAM) are, in effect, character chips, storing shapes of images used on-screen. GRAM is programmable and GROM is not.

GRAM has space for 64 program-defined 8 by 8 bit images. Both background and moving object images are stored here; since there can be up to 8 double-resolution moving objects defined in GRAM, there are always at least 64-(8*2)=48 background locations which the program can define.

GROM contains 213 predefined 8 by 8 bit image locations (TRIVIA: it was intended to contain 256 images, but space was stolen for an overflow of system software from the EXEC ROM) which include numbers, upper and lower case alphabetic characters, punctuation, and graphics characters (triangles, lines and whatnot).

For example, GROM location #37 contains the character E stored as:

BACKTAB contains other information on the display, such as foreground and background color, and whether the character is in GROM or GRAM. Therefore, one GROM or GRAM image can be used to produce different colored images on different parts of the same screen (e.g. you can have a white E on a black background on one part of the screen and a red E on a blue background on a different part of the screen; both use the same bit images pattern stored in GROM location #37).

The whole system is controlled by a 4K program called the Executive (the EXEC) which resides in the Intellivision's Executive ROM chip (with an additional 344 bytes over in the GROM chip). In a sense, the EXEC is the main game program, and the plug-in cartridge merely contains subroutines and data which are used by the EXEC. Normally, only EXEC routines access GROM, GRAM and the STIC control registers. The EXEC contains routines for moving objects around the screen, loading GRAM, creating sound and music, testing for moving object interaction, etc. The EXEC was written for Mattel Electronics by David Rolfe (Major League Baseball) at APh Technology Consultants. [Note: In the Intellivision, the Executive ROM is physically two 2K chips, a GI RO-3-9502 and a GI RO-3-9504; in the Intellivision II it is a single 4K GI RO-3-9506 chip.]

The scratchpad 256-by-8-bit static RAM chip (GTE 3539) is used by the EXEC and by the sound chip for temporary data storage. 147 bytes are left over for use by the game program to keep track of score, level, lives left, and other game variables.

An Intellivision has a left and a right hand controller. Each controller has a disc controller, a 12-number keypad, and 4 "action" buttons (2 on the left side and 2 on the right side). The disc controller can record any of 16 different locations when pressed, somewhat like a joystick. There are two peculiarities of the hand controller:

Each hand controller is hooked to an 8-bit input port. (These are physically the input ports of the sound chip, but that's not relevant to the programmer.) The disc controller outputs a 5-bit code; the action buttons output a 3-bit code. The 12-number keypad outputs an 8-bit code. The EXEC contains routines which debounce key inputs and convert 5-bit disc hardware codes to numbers, 0 through 15, which indicate directions. A game program can access the input ports directly, but the EXEC routines are usually used, instead. 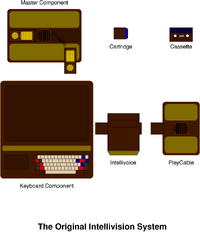 Intellivision with all addons 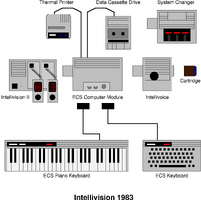 Intellivision II with all addons
Add a photo to this gallery

In 1984, a group of investors bought the rights to the name Intellivision and started selling Mattel's remaining video game inventory, primarily by mail-order. Sales were strong enough that INTV contracted Quicksilver Software and Realtime Associates to have former Mattel programmers complete unreleased Intellivision games, and produce new ones.

INTV kept the Intellivision name alive for several years, surviving well into the Nintendo/Sega era before finally closing due to bankruptcy in 1991.

Like Atari, Mattel marketed their console to a number of retailers as a rebadged unit. All are simply clones of the Intellivision Master Component with minor cosmetic differences.

Retrieved from "https://retroconsoles.fandom.com/wiki/Intellivision?oldid=6359"
Community content is available under CC-BY-SA unless otherwise noted.